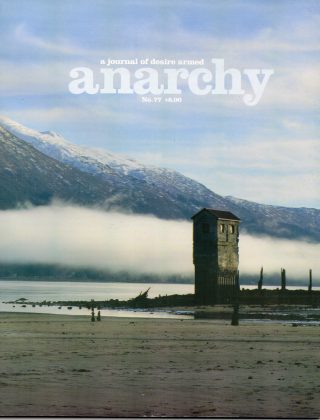 The Future of Insurrection

By Lupus Dragonowl from AJODA #70/71 & #72/#73 Section 1: The composition of insurrection What is insurrection? 'The goal of any insurrection is to become irreversible. It becomes irreversible when you've defeated both authority and the need for authority' (CI) 'The catastrophe is not coming, it is here. We are already situated within the collapse…

From AJODA #76, by Lupus Dragonowl Spectres, Joylessness, and the contours of ressentiment Identity Politicians (IPs) are a particular kind of leftist who use the spectre[1] of an identity-category (gender, race, sexuality, etc) as a lever to obtain power. In the sense discussed here, they should not be considered coterminous either with groups of people…

By Bob Black, AJODA #38 – Fall 1993 Dear Politically Challenged, Getting three issues at once, as I just did, impresses on me the enormity of your output — that anthology you’ve considered will have to be huge to be at all representative. I am not going to try to make up for lost time,…

For a World Without Morality

By Anonymous, AJODA #38 – Fall 1993 This introduction to a critique of social customs is a contribution to a necessary revolutionary anthropology. The communist movement possesses a dimension which is both a class and human one. It is a movement which is based on the central role of workers without being a form of…

FBI vs. the Branch Davidians: Assembling an alternative understanding

By Dina Fisher, AJODA #38 – Fall 1993 On April 19, 1993, live broadcasts of armored tanks and burning buildings flooded my TV screen. Flipping from station to station, I gathered that somewhere between 70 and 100 people were burning to death inside the buildings. The news reports cut back and forth between live footage…

A Critique of Half-Assed Radicalism

By Héme, AJODA #38, Fall 1993 Although I am involved with Interrogations, what follows does not flow exclusively from how I experience this activity. Nor is it independent of it. Rather, I would like to attempt to define what underlies an uneasiness I have felt in the last few months while reading texts from what,…

Adiós, Catalonia! In the Aftermath of the Spanish Civil War

By Manolo Gonzalez, AJODA #38 & #39, Fall 1993 / Winter 1994 In 1939, 350,000 Spaniards went into exile. Many Anarchists took refuge in Latin America — in Mexico, Argentina and Chile. Here is a personal memoir of an Anarchist family escaping Franco’s fascists and the horrors to come. Part I. Catalonia! At last we…

Peru: The Ideology Of Apocalypse Shining Path To What?

By Manolo Gonzalez, AJODA #37 – Summer 1993 Introduction In one episode of his novel, Yawar Fiesta — Feast of Blood – , the Peruvian writer José Maria Arguedas describes in painful detail the combat of a condor tied to the neck and shoulders of a bull. Seldom does either animal win. The bird pecks…

By Neal Keating, AJODA #37 – Summer 1993 “you got a dog race you got a horse race you got a human race; but this is a rat race…” — Bob Marley Race is a fiction. That does not preclude people from acting as if it were fact. Race is palpable, you can feel it…